Iceland is of course best known for being the ‘Land of Fire and Ice’, thanks to its many volcanoes and glaciers. There are however some other interesting and somewhat unusual attractions, and one of these is the plane wreck on Sólheimasandur, a black beach on the south coast of Iceland.

It’s about a 20-minute drive from Vik but first a shout-out for The Soup Company in Vik where we first stopped for some lunch before visiting the plane wreck.

The Soup Company is a great place to try Iceland’s famous red hot lava soup. It’s their signature beef goulash soup, is full of flavour and comes in a black lava bread bowl with yoghurt on the side.

But they do many other soups, too, such as an Icelandic lamb soup, a curried fish soup with Iceland cod and shrimps, and an Indian winter soup (with carrots, onions, lentils, coconut cream, crushed pineapple and Indian herbs and spices). If you can’t decide, simply choose the tasting menu (for one) where you get to try three soups in three bowls.

Whatever you choose, they are wholesome and filling, and they’ll even refill your bowl if you’d like more!

Feeling suitably refreshed, we hopped back into the car and made our way west along Route 1 to see the plane wreck.

But first, I’ll give a little background to the crash. It was back in 1973 that a US Navy transport plane ran into difficulty and crash-landed on the beach at Sólheimasandur. The aircraft was flying from Hofn Hornafjördur Airport to Naval Air Station Keflavik, after delivering supplies to the radar station at Stokksnes. Although reported as the wreck of a Douglas DC-3, it is actually the remains of a converted Douglas C-117.

Different theories abound as to what caused the crash. The Airline Safety Network states theat the airplane experienced severe icing, resulting in the crew being unable to maintain altitude, forcing thet plane to land. Some say, though, that the crash happened because of a failure by one of the pilots when switching between fuel tanks, resulting in the plane running out of fuel and being forced to land. Apparently there was thick fog and visibility was so poor that there were times when the crew was unable to see the tips of the wings.

There’s even confusion on the date of the crash. Many reports say it came down on 24th November 1973, yet the Icelandic newspaper Morgunblaðið reports, on the 22nd November 1973, that it had crashed the day before the date of publication. This date of 21st November 1973 seems to be accurate, and is backed up by the Aviation Safety Network summary.

Whatever happened, and on whatever date, every crew member survived without significant injuries and the remains of the plane were abandoned on the beach. The plane was subsequently stripped by the US Navy of anything of value, but the main fuselage still lies where the plane crashed. It has previously been used as storage by the farmer whose land it had crashed on, as well as for target practice by local hunters (which accounts for the bullet holes you might see), but has since become a tourist attraction in its own right, probably helped by coverage it has received in music videos and on TV (see below).

You used to be able to drive all the way to the crash site, or even stay overnight there, but both are no longer possible. Although it is situated on private land, you can, however, still visit and there is a large car park just off the main Route 1 ring road.

Most people visit on foot from here, but there is the option to take the Plane Wreck Shuttle. Although people waited a short while for this when we were there, it soon materialised that it was not running. In the past, there has been the option to hire a ‘fat bike’ but we saw no evidence of this at the time of our visit.

A sign tells visitors that it takes 3-4 hours to hike both ways.  This doesn’t seem all that realistic in my opinion – on a good day, I think it can be done one way in about 30 minutes if walking briskly or within an hour if walking at a more comfortable pace.  That said, perhaps a generous time estimate is given for good reason since the weather can change quickly and can adversely affect visibility, so it’s best to err on the side of caution. Do take care – an American tourist died in 2017 close to the plane, as did two Chinese tourists in their early 20s in 2020, presumably caught out by adverse weather conditions. It’s therefore a good idea to check Iceland’s weather service (vedur.is) before venturing out. And don’t forget the emergency number in Iceland which is 112.

The path to the plane wreck is more clearly defined nowadays than it has been in the past, helped by occasional reflective markers in the ground, hopefully reducing the risk of people getting lost.  As walks go, it’s not a very exciting one – you’re basically walking over a glacial outwash plain that looks like this.

Eventually, after about two miles of this almost post-apocalyptic landscape, the path track veers to the left and the plane comes into view in the distance.

When we arrived, there were people climbing all over it. I have read that this is illegal but am not sure if this is true. Regardless, I wouldn’t recommend it – firstly, there are parts of the plane that didn’t look very stable; secondly, it wouldn’t be a great place to slip and twist an ankle (or worse still, break a leg); and thirdly, it’s just not very considerate to other people visiting and wanting to take photographs.

Whilst the plane wreck is quite interesting to see and look around, I don’t think you’ll need that long there once you have seen it. It’s a fascinating scene in the middle of nowhere, surrounded by mile upon mile of nothingness – just black sand as far as the eye can see. 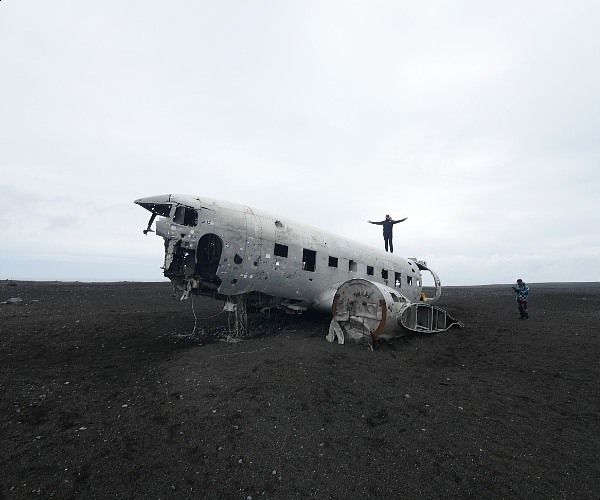 You can see inside the dilapidated fuselage. Apparently the aircraft served in both Korean and Vietnamese wars before being deployed to Iceland’s Keflavik Airport.

Unlike many of Iceland’s attractions, the plane wreck differtiates itself because it is entirely artificial, providing a striking contrast with its otherwise untouched natural environment.

This surreal scene – a grey fuselage set against a black backdrop and often a grey sky, looks more like a scene from a science fiction movie that it does reality. For this reason also, of course, it represents a photographer’s paradise. 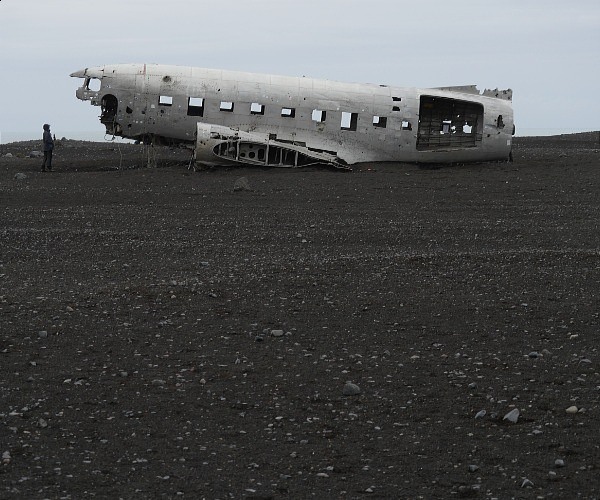 For a number of years, the local Icelandic people did not regard the wreckage to be something of international interest and fascination and even discussed have it removed because it was a blot on an otherwise untouched and pristine landscape.

Given its enduring popularity nowadays, it seems unlikely that this will ever happen. Nevertheless, I’m sure many would question the appeal in visiting this wreck given the many natural wonders that you could visit in Iceland instead.

Perhaps it’s the otherworldly landscape that the wreck is set in as well as the mystery that surrounds the crash that adds to the intrigue. One thing for sure is that the publicity that the wreck has received through various media has certainly increased awareness of, and interest in, the site. Perhaps most famously of all, Justin Bieber’s video for the song I’ll Show You features him skateboarding on the top of it. Watch from 2 mins 11 seconds.

The music video for the song Gerua in the Bollywood film Diwale sees actors Shah Rukh Khan (aka SRK) and Kajol posing on top of the plane. Watch from 1 min 31 seconds.

And the music video for the song Let Me In, from Korean girl group Loona, also features the plane. Watch from 53 seconds.

Mercurio by Emis Killa is yet another music video to feature the wreck. Watch from 1m 38 seconds.

Finally, the plane wreck also appears when Mikael encounters it in the Netflix sci-fi drama, Katla.

Disclosure: Our trip to Iceland was also sponsored by Helly Hansen.