The cold waters off Iceland‘s coast support a variety of marine life and provide the perfect opportunity for whale watching, particularly during the period from April to September. Whales, dolphins, seals and porpoises are regularly seen in their natural environment on boat trips out of Reykjavik. And sometimes, if you’re very lucky, you may even see basking sharks.

Whilst there are many whale watching services operating out of Reykjavik, knowing who to choose can be a challenge. With the larger vessels, your view might be a little more distant and the ability to move to get the best view might be somewhat restricted. With smaller boats such as ribs, you’ll have greater manoeuvrability and might have a greater chance of getting ‘up close’, but this not provide you with the your desired level of comfort, particularly if the weather is unfavourable. 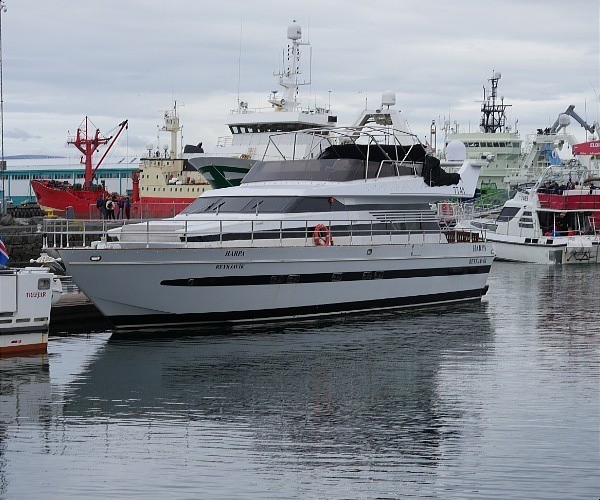 We went with Harpa Yachts, who offer the perfect combination of good visibility, comfort and manoeuvrability, aboard a luxury yacht where you can escape the crowds and benefit from an experience with fewer passengers, and with local and personal service on board. 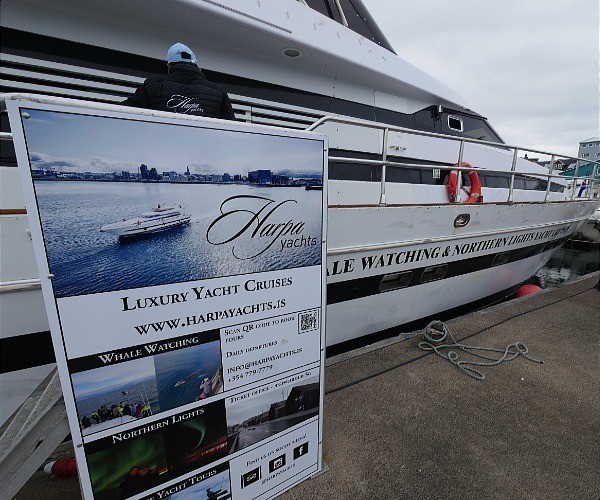 Harpa Yachts is a family company that has been offering comfortable whale, dophin and puffin watching cruises from Reykjavik since 1998. The founders and owners were pioneers of whale watchting trips in Reykjavik. Their main focus has been on a personal, quality serivce aboard their well-maintained 70-foot MY Harpa yacht, fully equipped with a salon, lounge, bar and a fly bridge with 360-degree views. They also have MY Amelia Rose which is 108 feet long, often used when the weather is less good, and their newest addition, the 50-foot MY Axel Rose used for smaller groups and exclusive trips. 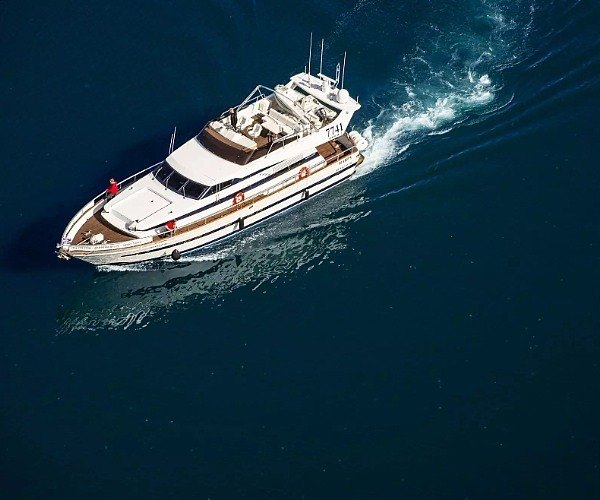 Cruises depart from Reykjavik Old Harbour in downtown Reykjavik and head out to Faxaflói Bay, a large bay in south-west Iceland, between the Reykjanes and Sn?fellsnes Peninsulas.

“Welcome aboard this one-way trip to Greenland…” said Capt Einar over the tanoy system as we departed the harbour at Reykjavik. By this time, we’d got used to Icelanders enjoying a joke or two from other tours we’d been on, but we did wonder if some other passengers were momentarily slightly panicked by the announcement! 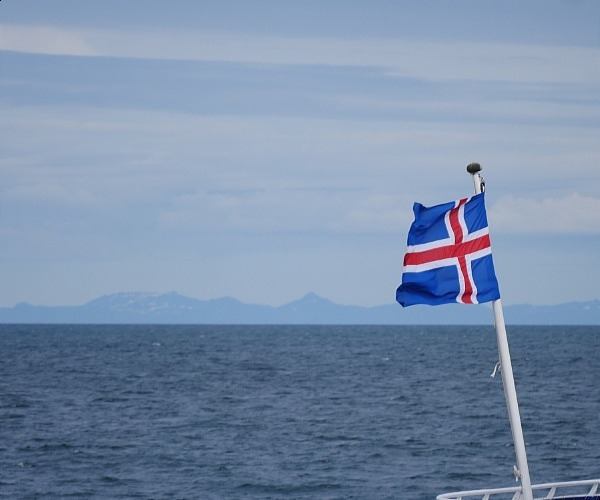 We departed Reykjavik, hopeful of seeing whales but at the same time realising that we were dealing with nature and a successful sighting was by no means guaranteed. That said, most trips are successful, particularly in the peak Summer months of July and August. 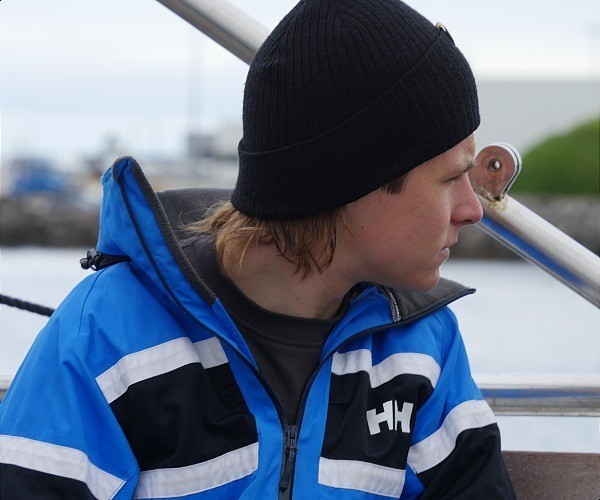 The vessel is beautiful and was originally built in Italy by Cantieri di Pisa. She was bought by Harpa Yachts in 2012 from owners in Greece and sailed to Iceland, before being modernised in 2017-2019. She can hold up to 35 passengers, ensuring that you have a fairly intimate whale watching experience. 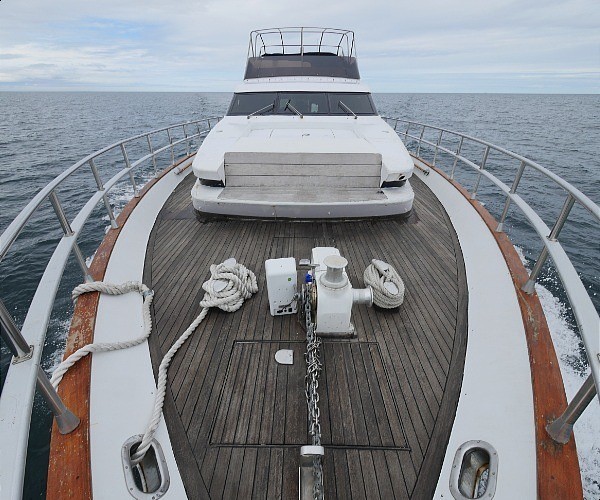 As we ventured out into the bay, we saw occasional puffins – often stretched out in a line of half a dozen or so – with many carrying sand eels in their beaks, no doubt taking them to their young. Iceland’s nesting grounds account for around 60% of the global population of Atlantic puffins during the Spring and Summer, so there’s a high chance you’ll see some, even if it’s from a distance. 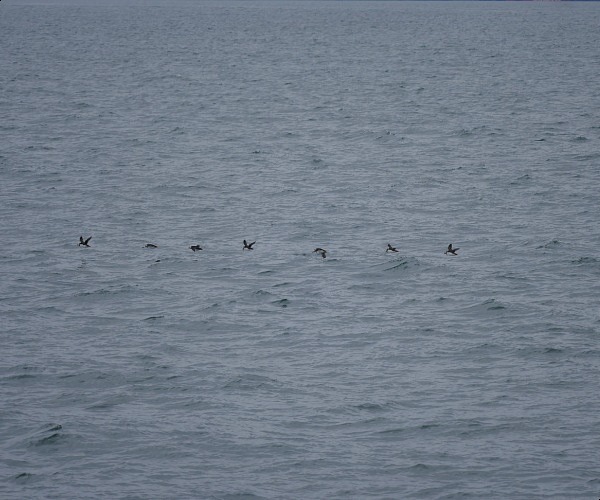 Of course, the main purpose of our trip out to sea was for a whale sighting and that was so far eluding us, despite the best efforts of our captain and crew. As many as 23 different whale species have been recorded off the shores of Iceland, but only 12-14 of these are considered to be regular inhabitants. 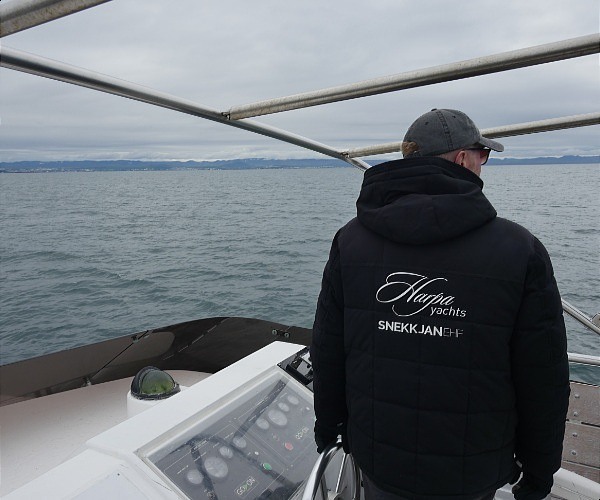 The vessel has an observation deck at the top and passengers were advised to say a time on the clock if they should spot anything (for example, “3 o’clock” if there was a sighting on our starboard side) to help others know where to look. 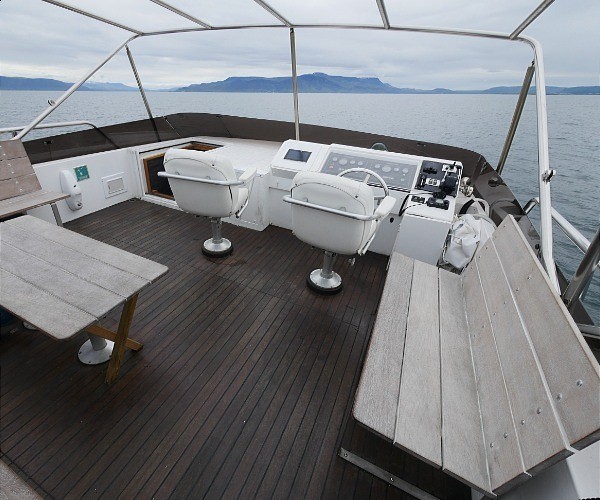 Everyone was scouring the sea hoping to see something but it seemed we were out of luck. 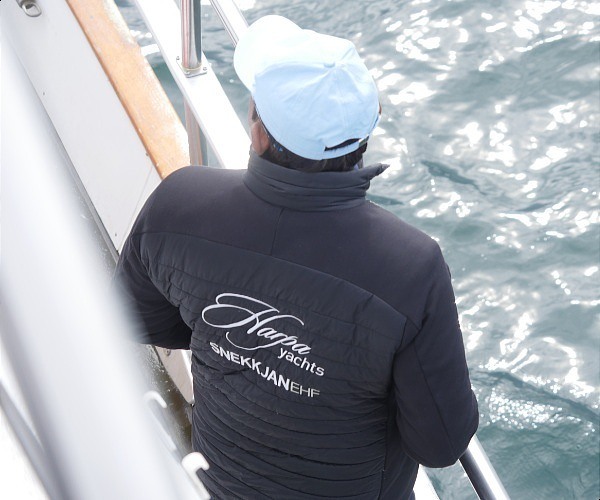 Then all of a sudden, we had a sighting. A humpback whale! 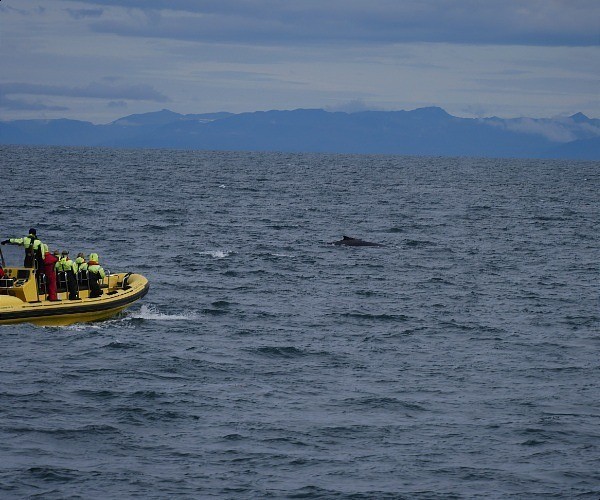 Everyone’s gaze tranfixed on where we’d just seen it. There were three or four boats looking for whales and one of the smaller boats re-positioned itself for a better view, before we saw it come to the surface again some minutes later. 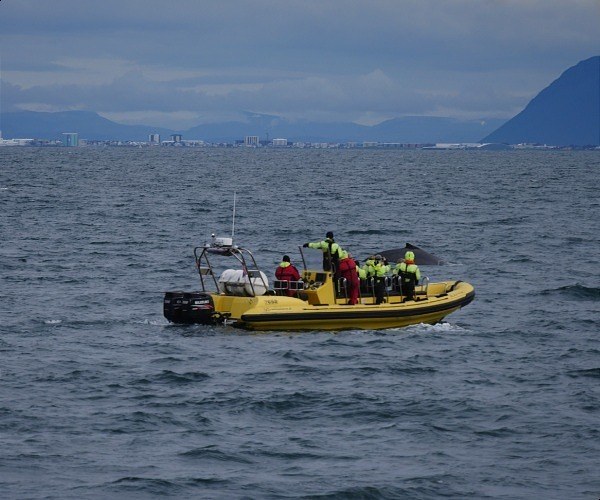 Here’s another version of the same photograph, cropped a little tighter. 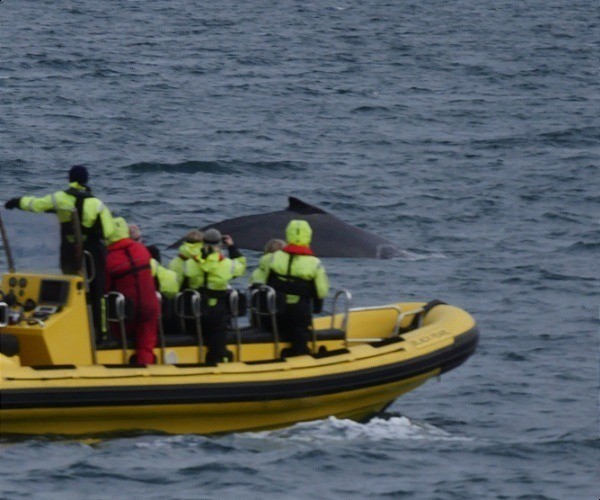 The humpback whale (or hnúfubakur as it is called in Iceland) typically stays underwater for 5 to 15 minutes. They are characterized by long flippers and typically live in solitude or small, unstable groups. There are thought to be up to 100,000 humpbacks worldwide and they migrate a distance of 6,000 kilometres one way – the longest journey known for any mammal. They can be anything up to 17 metres long (that’s about the length of 10 adults laid on their side in a single line!) and up to 40 tons (the combined weight of three double decker buses!).

With a significant period of time having passed, and no further sighting, it seemed our friendly whale had moved on. An alert came through on the radio that a whale had been sighted elsewhere so all the boats left to try to take advantage of that sighting. We stayed where we were and our captain’s patience was rewarded when the whale appeared once again, just as the other boats left! 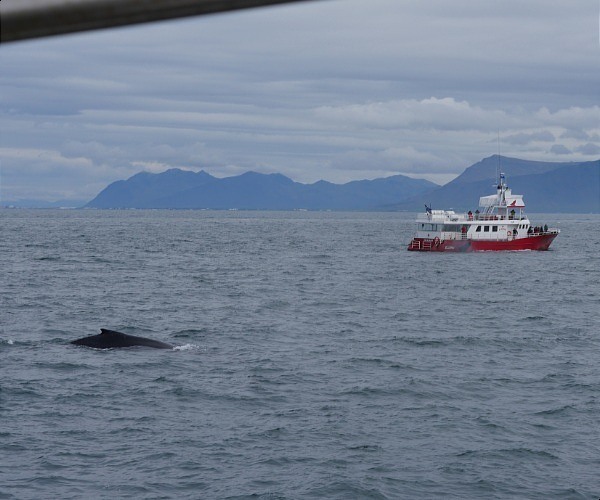 Humpback whales are well-known for their breaching acrobatics – whilst we never saw this whale breach, we were lucky enough to see it come to the surface on several occasions. That alone was a very special experience. 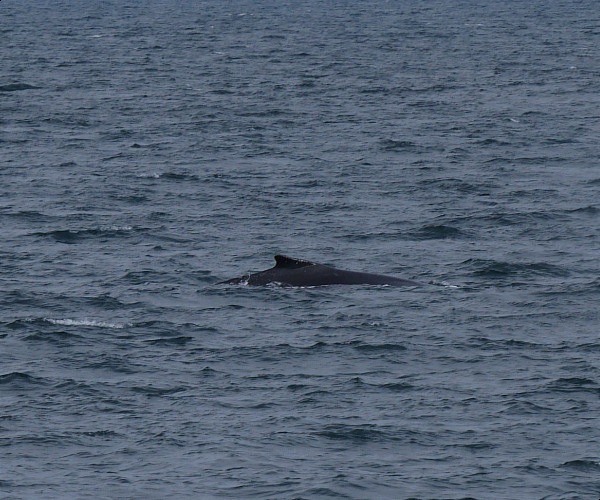 There was one final wave of the whale’s tail, known as a fluke, as if taunting the boats that had chosen to look elsewhere. Lifting the fluke like this before a dive is something that is particularly characteristic of humpbacks. 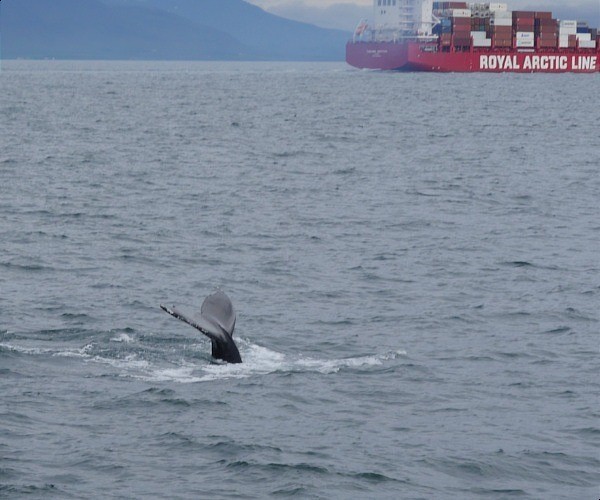 With Harpa Yachts, we got to experience a fun small group tour, with seating options both indoors and outdoors whilst on board. Warm blankets are available, as is free WiFi, a bar and lounge, a restroom and professional and experienced crew. In the event of no whale sightings – which can happen on rare occasions as nature is not always 100% predictable – a free ticket is also offered. 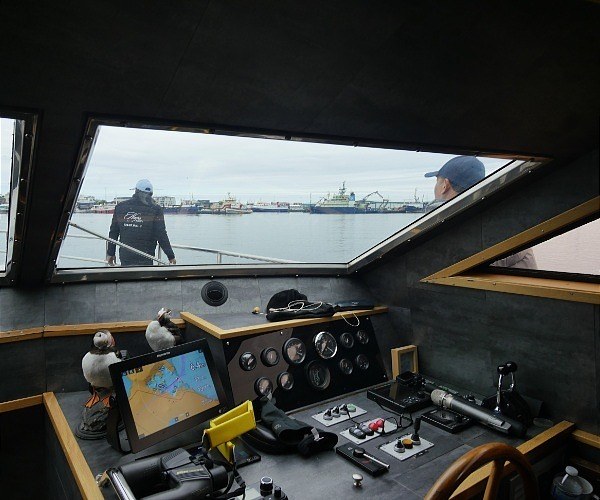 Whale watching in Iceland is a unique experience that you won’t want to miss! 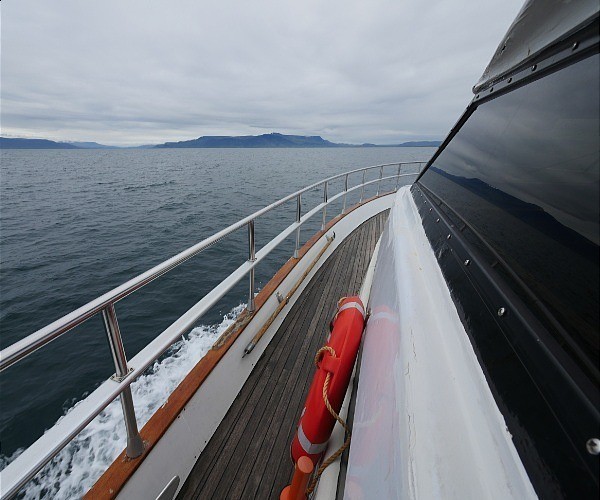 Sadly, whales are still hunted in Iceland despite an international agreement by the International Whaling Commission (IWC) to stop all commercial whaling by 1986. However, the practice of whaling in Iceland has seen a sharp delcine and the country has announced that, due to falling demand, it will no longer hunt whales from 2024. Hopefully this will make whale watching trips out of Reykjavik even more rewarding in the future.

As well as whale watching tours, Harpa Yachts also offer a Northern Lights yacht cruise as well as private yacht tours along the coastline of Reykjavik, with unique seaside views of the city. On a private cruise, you can do anything from deep-sea angling to skeet shooting to golf driving competitions.